It was early summer, 1987. I was at a friend’s cottage and Celebration Day came on. We were all collectively celebrating our final days fo high school.

It was the first time (gasp!) I had heard this song. It wouldn’t be the last.

Despite not hearing this one song, I had been a fan of Led Zeppelin since my first coed dance at Graham Park and this tune came on and everyone was in a hustle to have a partner for Stairway to Heaven.

With a couple of years, I had this beast of a poster plastered on my bedroom wall: 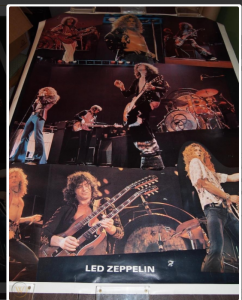 The size is about 3.5 feet by 5 feet. It was massive and took up half of one of my walls. The other half was a similar poster with The Who on it. I bought both of the posters from a record shop on Rideau Street in Ottawa when I was a teen.  They were a pretty inexpensive and awesome proxy to wall paper. I’ve actually tried to find them, but they don’t exist any more. I think my wife is quite relieved that I haven’t tried much harder than a quick internet search.

Just recently, I read a fabulous review of Led Zeppelin III with Guitar World magazine discussing Led Zeppelin III and how it was so different – acoustic and yet also sonically unique – compared to the previous albums. I couldn’t find the article – the publishers of the magazine have many ideas about magazines vs online, but don’t seem to be aware that the two can live together.

Also, who didn’t love the original album cover, with the multiple layers and images rotating images that would pop into view as you spun the inner disc around? Their other albums had similar features, like Physical Grafitti, with the sliding letters and In Through The Out Door, where many young fans ruined the cover by dabbing drops of water on it to make the monochrome images appear in colour.

This will be one of the first songs I play when we’re all collectively allowed to truly enjoy our freedom again.

Here’s a thought about Jimmy Page of Led Zeppelin: If you’re a guitarist, you’ve done the ‘Stumbling to Heaven’ version of one the most classic tunes out there. Many people post their own versions online for others to imitate poorly. Specifically, with Stairway to Heaven, I normally get through the intro, but then there’s that transition from acoustic to electric mastery where Page invokes all of the powers of all of his tools at hand and belts out his face-melting solo.

There’s been no shortage of performers doing their own solo bits and acoustic sets to reach out to their fans.

So … here’s a thought: Jimmy Page should just start calling some of these guys on the web. Catch them off guard. Here’s how the conversation might go:

‘What the fuck? Did Don put you up to this? Are you a friend of my sister’s calling from England? It’s nowhere near April Fool’s. Who is this?’

‘Seriously man … it’s Jimmy. I’ll turn on my video just to prove it to you … (pause … sounds in background … muffled click … video appears).’

The sound of my jaw dropping and me almost peeing my pants.

‘Look, Bill, you did a pretty decent bit of Stairway right up to the solo (minus about 20 little glitches, but I won’t fault you for that), but I hear you need some help with the solo …’

‘Look … I can see you’re a little shocked. It happens a lot. So here’s what we’ll do: I’ll ring you back in 24 and we’ll do a little rehearsal, I’ll walk through some tips and then maybe we’ll try the tune together after another night’s sleep. How’s that sound?’.

‘Look man, I wanted to help you enjoy this tune, so you’re going to have to chill a little, but let’s do this, OK?’

I’m sure some other amateur guitarists out there would be a little more cool about the whole thing, but the first awesome guitarist – Page, Clapton, Gilmour or any one of the hundreds of other amazing guitarists out there – that puts this together would firmly establish their legendary status and drive their reputation even higher.

And wouldn’t it be so fun to see this kind of basic to genius collaboration?

Imagine a whole series where amateur meets genius and they noodle on guitar (or drums or piano, etc) together online and as a collaboration. Sign me up for that series!

Jimmy … if you’re reading this … all you have to do is go through the ‘Contact me’ page and we’ll set up a time!

In reading about the production of the sound, it seems like there were a few glitches, including the loss of an original drum intro from John Bonham and possibility that it wouldn’t even be included on the 1970 release of the third Led Zeppelin album. The former loss resulted in the use of a Moog synthesizer drone from the previous song, Friends, as they intro.

Also, if you listen carefully, the drums finally do come in, but almost seem out of sync with the song. Perhaps another misstep? It’s hard to critique John Bonham, but take a listen and let me know what you think.

In a contemporary review of Led Zeppelin III, Lester Bangs of Rolling Stone described “Celebration Day”, along with “Out on the Tiles“, as “production-line Zep churners that no fan could fault and no one else could even hear without an effort.”

Record producer Rick Rubin has said of the song: “[“Celebration Day”] feels like a freight train, even though it’s not one of their heavier songs. There’s tremendous momentum in the way they play together. The bass playing is beyond incredible and the guitars interact really well—there’s a heavy-riffing guitar, which is answered by a funky guitar.”

Lastly, there are understones of political commentary on this and several other songs on Led Zeppelin III. Celebration Day, despite it’s driving sound, tackles issues of race and religion and offers a slight homage to the co-founder of Atlantic Records, Ahmet Ertegun. Being Turkish-English, the man had some perspective on being unique and had this to say about the song:

I began to discover a little bit about the situation of black people in America and experienced immediate empathy with the victims of such senseless discrimination, because, although Turks were never slaves, they were regarded as enemies within Europe because of their Muslim beliefs.

In 2007, the band got back together with Jason Bonham, John’s son and did a single tribute concert at Lond’s O2 stadium to Ertegun when he died the year before (after an unfortunate accident at another show).

I’ll be there if they ever decide to tour again, even if they’re rolled out in wheelchairs!