Don’t You Forget About Me, Simple Minds

Sometimes, I feel like my life was meant to be about waiting.

Example: here’s a shot of me and some friends getting ready to wait in 1986. 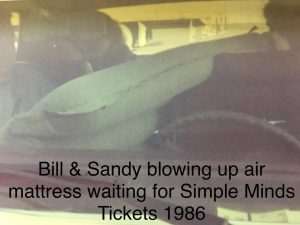 It’s hard to tell, but that’s me on the right and my friend from high school, Sandy, in the back of Sonja’s Thunderbird car.

We’re getting ready for a long night of waiting.

Waiting for tickets to be released for the Simple Minds concert in Ottawa, circa 1986.

The song Don’t You Forget About Me is the cornerpiece tune with the soundtrack for the hit John Hughes film Breakfast Club, released in February, 1985. I was almost 17 at the time.

For those of you don’t know the movie, it’s about 5 kids who have to serve detention on a Saturday together with this guy:

Surprisingly, the original song, written with the Simple Minds in … mind … was turned down by the band. And about half a dozen other performers turned it down.

WTF? I don’t know if it was rushed as a song or was incomplete, but to turn down a song that ultimately broke the Simple Minds to stadium-class performers boggles the mind. The rationale was that they didn’t write it, so they didn’t want to lay claim to it. The writer – Keith Forsey – persisted, sucked up and finally got his way and the band recorded it quickly for the movie, adlibbing with the ‘la la la la …’ parts.

The time between getting the tickets (I honestly don’t remember waiting with Sandy and Sonja, but I’m sooo happy that Sonja has a mind like a steel trap and pictorial evidence) and the show is not relevant.

What’s relevant is that at the concert in Ottawa, me and several other friends discovered TWO flaws or loopholes in the show’s security. First, the ‘catwalk’ or stage abutted the fence of general admission attendees, so you could jump from the ground, hop on to the stage and parade around, apeing Jim Kerr (the singer) or do anything else you felt like doing.

Courtney Cox just did it with Bruce Springsteen for Dancing in the Dark, so why shouldn’t we do the same thing?

(Ignoring the ridiculous reminder that I’m not Courtney Cox).

Of course, security would be on you in a heartbeat and toss you off the stage.

Second – and this is the critically important part of the flaws – security would just escort us back to general admission and throw us back into the audience.

It was like getting a free ride at Disney. At the front of the line.

There was 4 or 5 of us and must have gone up on stage 4 times each. The first couple of times were funny. Then sad. Then the whole audience was yelling at us to get off the stage.

Ultimately, Jim Kerr dropped the mic after saying ‘Fuck this’ on his last song and walked off the stage.

The lights went on.

I was the last to jump on stage as this happened and can remember clear as if it was 10 minutes ago standing like an idiot in front of a crowd of about 20,000 VERY ANGRY people not even remotely aware of what the fuck had just happened.

Of course I’m ashamed at what happened during the show and as a result of our getting carried away. Here’s my official apology to Jim Kerr and the band:

We live in different times. It’s time to come clean and apologize to you and your fans.

34 years ago, when I was a foolish youth celebrating my 18th birthday on this day in Ottawa on May 16, 1986, you were in the same place performing on stage to the delight of many thousands of devoted fans, including myself.

You wouldn’t have known it that night how delighted we were to see you in our town. I love your music. I love what you’ve done and I love that you’ve been steadfast in creating, performing and contributing to the arts scene over the last 5 decades. Many of your songs form the soundtrack of my youth and I thank you for that.

Unfortunately, on that evening, myself and a small handful of friends took the spotlight from you and overstayed our welcome on your stage.

We enjoyed ourselves but I personally had no idea how carried away things would get and I’m sorry that we offended you. After all that happened, I still appreciate that no one got hurt, especially you. I know that you’ve played Ottawa since that date, but you’ve probably always wondered why, but I assure you, the people of Ottawa and surrounding areas continue to adore your work – as do I – and are grateful that you choose their city over the thousands of other options when touring.

I certainly hope that once the planet returns to some sense of ‘normal’ again, you and your staff/personnel will be able to tour again and your fans in the area will be able to receive you with loving arms.

For the record, none of this is legally binding and someone has hacked my account. 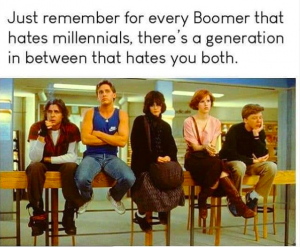 John Hughes was a Boomer who ‘got’ the Gen-X mindset.

The Breakfast Club trained Gen-Xers like me to take shit like Covid in stride. We’re not getting any attention but we collectively know we’re experts with attrition.

Bring on the seige. We’ll hand off the homework to the smart guy in the room and he’ll (re)solve things for all of us.

Right now, conspiracies point to Bill Gates being that guy. Who, ironically, was played by none other than Anthony Michael Hall, the nerd in the Breakfast Club.