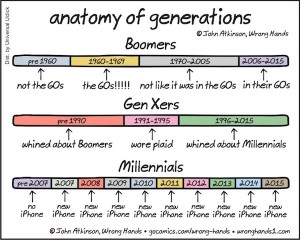 A couple of articles have prompted some random thoughts about ‘Millennials’ – those aged approximately 20-40 and the bulk of whom are children of Boomers – and their consumption habits.

I find the topic fascinating.

The main theme that I admire with Millennials is a bit of a ‘velvet glove’ approach to saying FU to the established way of doing things.  They acquired the sentiments of their hippy-dippy parents without being over the top with ‘peace, love, dope’.

Which is exactly what reports from so-called experts have tried to do when releasing results of a couple of studies related to Millennial consumer habits.

Apparently, Millennials have ruined the incredible fortunes of cereal producers everywhere because they’re ‘too lazy’ and seemingly incapable of cleaning up after themselves.

Now, I’m sure the study was done with a reasonable number of respondents, but if you read the comments with the CBC article, it’s safe to say that the level of frustration is considerably high – and for good reason.

Did the study ask other questions associated with cereal eating habits such as:

I could go on, but I think you get the idea.

Millennials are the top demographic group consuming wine in the US.  That’s because (without substantial research to back up this claim) they are young, without kids and therefore have lots of disposable income.  But they haven’t acquired a lot of property, so their wine choices tend to be more immediate as opposed to focusing on long-term ‘buy-hold’ strategies.  Of course, with so much shit wine on the market now, it’s easy to see why they’d fail to see the difference between a $10 bottle of wine and a $50 bottle of wine when they’re all being cranked out by the same company.

Some of them may even see it like the old Simpsons cartoon where they show Duff, Duff Lite and Duff Extra all coming out of the same tap. 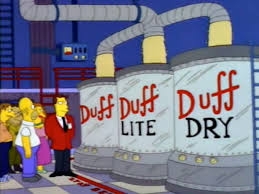 Which is why this story about corks vs screw caps just blew my mind.

This is like blaming babies for bad car seats when/if they get launched out of a car after an accident.

Surely, the article was written in jest.  And please stop calling my Shirley.

How can you ‘blame’ the current generation of consumers who are guzzling more wine than any other demographic when screw caps and other closures have been a part of the wine industry for as long as these ‘kids’ have been living?

As an aside, I’ll enter the debate about ‘cork vs screw cap’ with the simple conclusion:  for the vast majority of consumers, it doesn’t matter.  In most circumstances, wine has become a commodity, traded and shipped like any other commodity across the globe.  More wine will be made in China within a couple of years, outstripping the ‘traditional trio’ of France, Spain and Italy (possibly combined) and more of this Chinese wine will make its way into your ‘international Canadian blends’ than ever before.  Do you think this wine is being made to last, like everything else we get from China?

So what does it matter what the closure is when the vast majority of wine is being consumed within a few months of being bottled and a few hours of being purchased?

ANYWAYS … even though this has been a bit of a rant, I encourage ALL researchers and journalists that report on this research to consider the broader consumer trends and habits before publishing articles about specific demographic groups.

From what I’ve seen after a couple of decades of marketing and sales is that the Millennials are a tough nut for traditional marketers to crack.  They do things differently.  VERY differently.  Again, at the risk of stereotyping, they don’t like to own stuff like cars and houses and other junk that they just have to throw out when they hit their 40s.  They’re innovative and eat up disruptive tech (Uber, AirBnB, etc) in surprising ways. 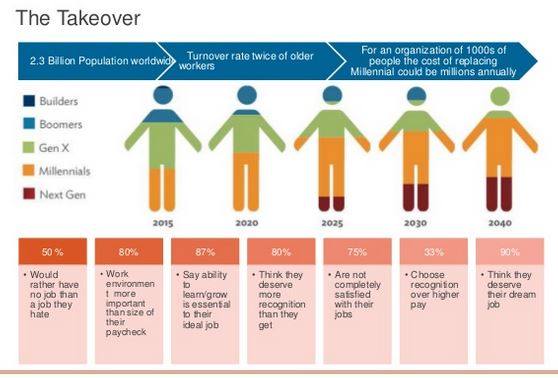 Finally, I think it’s safe to say that you shouldn’t underestimate the power and influence potential of Millennials.  This is the crowd that will inherit more money than the world has ever known, so they might eventually hire someone to scour their dishes or buy their snooty wine vs plonk, but until that day comes, be prepared to alter your business model because if you don’t, you may not be around to complain about it.